Some decent weekend weather presented us with our first attempt at entertaining, in the garden of course, since lockdown was eased. Four of us gathered to share a barbecued shoulder of lamb.

On most occasions when I used to travel in the States on business, I did so alone. I was in Richmond, Virginia many times and on one visit I had turned up to a restaurant but had to wait for a table to become available. I sat at the bar waiting. Eventually I heard myself being paged over the intercom:

Franco, party of one …

One hardly constitutes a party, I thought; that was after I had also thought “Oh, how embarrassing”. Still, four can definitely constitute a party in these strained times.This, of course, meant we had lamb shoulder bones for our visiting wildlife. I put them out at 23:00.

The new set of batteries in Foxcam worked; the video clips are back to a consistent length.

Good ol’ fox-formerly-known-as-Limpy pitched up at 01:25 and was in the garden working on the bones for 40 minutes. I’d actually trimmed some excess fat off and had put those pieces out, too. Limpy munched those first and eventually, once again, juggled both the knuckle bone and the blade bone into his mouth at once. He wandered around carrying his prize but returned to paw the ground where, I suspect, a few scraps remained.

Headlights the Badger put in an appearance at 02:30. He trotted around the garden but by now all the offerings had gone. When I tried putting peanuts out for any passing badgers I discovered that foxes like peanuts, too. Foxes tend to be earlier so the badger tends to get nothing.

The fox with the curiously misshaped brush wandered through at 04:20. We got a better profile of the shape of the tail this time. I’m still not convinced that this is Ratty with the brush growing back. This profile shows the muzzle markings and they seem different to me, as well as the fox looking slighter. 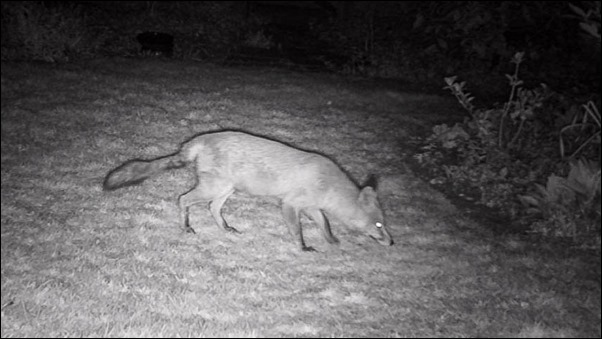 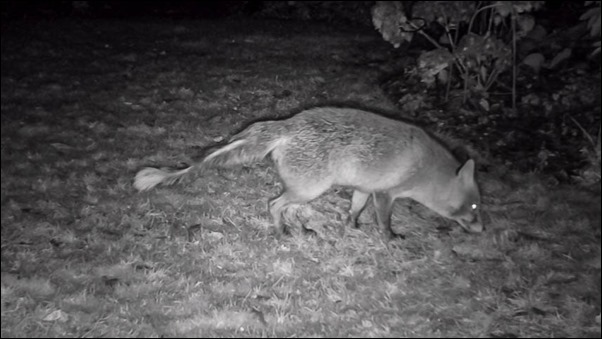 Come to that, the brush tip (what there is of it) looks a different colour, too.