This morning was time to visit Victoria Falls, or “the smoke that thunders”, which is a translation of the name used by the native Kalolo-Lozi people before David Livingstone found them. The “smoke”, of course, is the enormous amount of water spray caused by the water going over its precipitous drop into the gorge. We could see it in the morning looking downstream from our Waterfront Hotel vantage point. Since I had only long lenses with me, here’s a particularly naff phone shot grabbed in haste.

Having driven us to the Falls visitor area – ponchos available for rent – Bibi was particularly alarmed that I was going to carry my camera into the smoke. He was also concerned that my waterproof wasn’t – “this is the falls, not just rain”. He located a black plastic wrapping and bound my wallets, passport, pen, Covid-19 vaccination certificate and anything else he could find in my pockets for protection. He probably hasn’t met Scottish rain. My M1X should be fine; you can throw buckets of water at it.

I’d got the long lens in case any insects showed themselves in the vegetation. I needn’t have bothered.

Neither Francine nor I had been particularly fussed about Victoria Falls but as it turned out we were both very impressed and loved seeing it. Happily Francine did have an appropriate lens. In truth, the water spray really wasn’t as bad as its reputation would have had us believe. We didn’t venture to some of the wetter parts, though. Here’s the thing: the geography is very strange. I expected a sort of high plateau off of which the water would plunge to land at a lower level on the other side. It’s not like that, though; the land “on the other side” is just as high but the water falls into a narrow and very deep gorge. Standing on “the wet side” facing the width of the falls is all very well but you can’t actually see the expanse through the mist. You get saturated but for no very good reason. It’s best looking along the falls, IMHO, from the earlier vantage points on the walk and staying dry. Alternatively, cough up the $500 for a chopper trip. 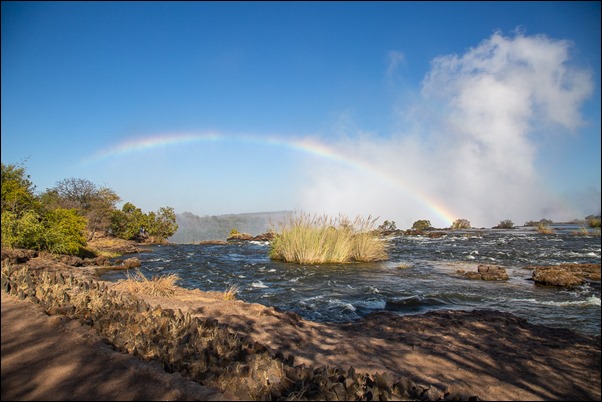 After lunch it was time to go dragonfly hunting on our chalet’s little pond. Given the lack of wandering about the African bush out of camps due to similarly wandering lions, leopards, elephants and hippos, etc, this was highly likely to be my best chance.

It started well. Immediately before Covid reared its ugly head, I had booked a trip to Turkey hoping to see at least the delightful Red-veined Dropwing (Trithemis arteriosa). That trip had been our first Covid casualty. However, I was utterly delighted to find several examples on my pond. There was also a completely beautiful damselfly called the Common Citril/Orange (Ceriagrion glabrum), which was also new to me.

In all, we found 11 species new to us, 10 of which we managed to photograph but there was one that got away. I won’t bore you with all of them but here’s a couple of relatives which included an old friend from Namibia, the Portia Widow or Shadow-bridge Widow (Palpopleura portia), together with its new-to-me cousin, the Lucia Widow (Palpopleura lucia).

Unfortunately, I sustained a dragonflying injury when, returning to the side of my pond from a vantage point along the dam wall, I klutzily tripped up a step in the dam wall and dragonflew to the ground, going down on one knee. It’s not the first time and it doubtless won’t be the last. I saved the camera and monopod but not either my knee or trousers. The trousers were convertibles with the bottom half zipping off so, having ripped the knee out, I unzipped and now had a splendid new pair of shorts. To quote the late, great Douglas Adams on the art of flying:

The knack lies in learning how to throw yourself at the ground and miss.

I still haven’t mastered it. That was not quite the fall I had in mind today.

Despite my knee, I was a happy camper – well, hotel guest. Decidedly satisfied.